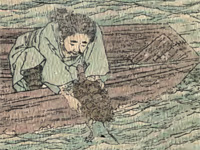 Well, one day he went out in his boat to fish. But instead of catching any fish, what do you think he caught? Why! a great big tortoise, with a hard shell and such a funny wrinkled old face and a tiny tail. Now I must tell you something which very likely you don’t know; and that is that tortoises always live a thousand years, at least Japanese tortoises do.

The Fisher-Boy Urashima, translated by B. H. Chamberlain, 1886

tortoise Animal covered with a hard shell : there are tortoises both of land and water.
turtle It is used among sailors and gluttons for a tortoise.

Samuel Johnson, A Dictionary of the English Language, 1755

buccaneer n
a pirate, esp one who preyed on the Spanish colonies and shipping in America and the Caribbean in the 17th and 18th centuries [CED]

“What’s a privateer?” Steve asked, puzzled. “Some kind of buccaneer?”

“Sort of.” Rita laughed. “The line was always blurry. Basically, a government that was at war would commission pirates to fight for them against the enemy. In peace, pirates might attack any ship they wanted. The trouble is, the term turns on a legal technicality. They were basically the same people, doing the same things.”

From 1660 until 1720, the so-called golden age of piracy, pirates again operated as privateers. This period saw some sailing under the famous “Jolly Roger” flag, with attacks by English pirates on both Spanish and French ships. There were also English attacks on the Dutch; the island of Saint Eustatius, a Dutch sugar island, was attacked by pirates and British soldiers on many occasions, changing hands 10 times during the 1660s and early 1670s. French pirates also started operating freely from their ports on the island of Hispaniola (modern-day Haiti and the Dominican Republic). Sir Henry Morgan, a Welsh buccaneer, sacked the Spanish town of Portobelo in Panama, which had been well garrisoned.

Cartesian diver or Cartesian devil a device, devised as a toy, adapted as an ultramicrorespirometer, consisting of a small piece of capillary glass tubing open at one end and closed and slightly expanded at the other.

A Cartesian diver or Cartesian devil is a classic science experiment, named for René Descartes, which demonstrates the principle of buoyancy (Archimedes’ principle) and the ideal gas law.

The Cartesian diver demonstrates not only buoyancy, but the implications of the ideal gas law and Pascal’s principle as well.

verbing n the act or practice of using a noun as a verb, such as ‘medal’ to mean “to win a medal” (CED)

Verbing is a time-honored way of coining new words out of old ones, the etymological process of conversion (or functional shifting). Sometimes it’s also a kind of word play (anthimeria), as in Shakespeare’s King Richard the Second when the Duke of York says, “Grace me no grace, and uncle me no uncles.”

Richard Nordquist, “What Is Verbing? – Turning Nouns Into Verbs – Definition and Examples of Verbing”, About.com

END_OF_DOCUMENT_TOKEN_TO_BE_REPLACED

Pavhari Baba was born near Varanasi of brahmin parents. In his youth he had mastered many branches of Hindu philosophy. Later he renounced the world, led an austere life, practised the disciplines of Yoga and Vedanta, and travelled over the whole of India. At last he settled in Ghazipur, where he built an underground hermitage on the bank of the Ganga and spent most of his time in meditation. He lived on practically nothing and so was given by the people the sobriquet of the ‘air-eating holy man’; all were impressed by his humility and spirit of service. Once he was bitten by a cobra and said while suffering terrible pain, ‘Oh, he was a messenger from my Beloved!’ Another day, a dog ran off with his bread and he followed, praying humbly, ‘Please wait, my Lord; let me butter the bread for you.’ Often he would give away his meagre food to beggars or wandering monks, and starve.

“Ashes, Scofield. I repeat, meaningless! And that’s nothing but a sobriquet for someone long dead and forgotten.”

I’ve smelt a skunk that went to Davy jones’ locker.

Can you talk like pirates? Here are some phrases that may come in handy: Arrr! That be a fine cow by the road. Avast ye hearties! Me thinks me needs a rest stop. Shiver me timbers! I’ve smelt a skunk that went to Davy jones’ locker. What other expressions can you make up?

Pretend the car is a ship and you are all pirates. Can you design a treasure map and a flag that represents your “ship”? Take turns being the capt’n and the maties. There better not be a bilge rat among you. Can you talk like pirates? Here are some phrases that may come in handy: Arrr! That be a fine cow by the road. Avast ye hearties! Me thinks me needs a rest stop. Shiver me timbers! I’ve smelt a skunk that went to Davy jones’ locker. What other expressions can you make up?

END_OF_DOCUMENT_TOKEN_TO_BE_REPLACED

A-Cownting
Each person picks a side of the road to count cows on, and whichever side counts the most cows wins.

Quote of the Day

The mind of man is capable of anything - because everything is in it, all the past as well as all the future.
Joseph Conrad
1857 - 1924

Wordnik Word of the Day

The transfer of a surplus from one account to cover a deficit in another.